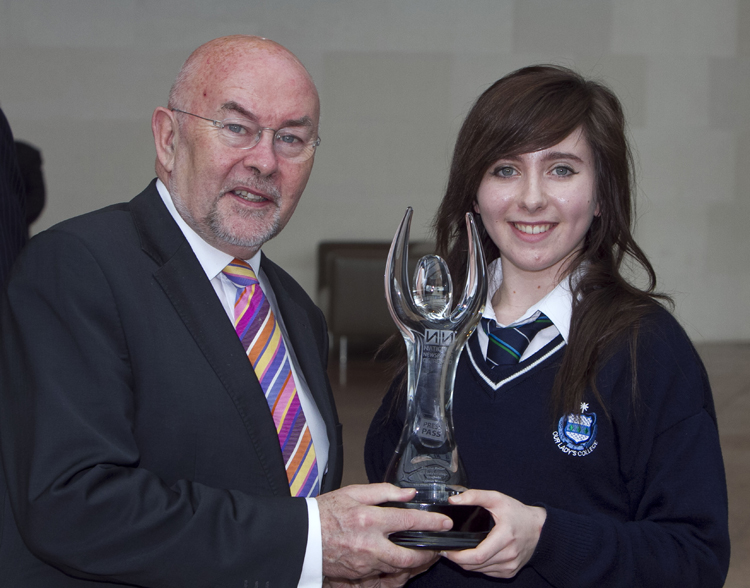 National Newspapers of Ireland (NNI) today honoured Transition Year student journalists who competed in the NNI Press Pass 2013 national writing competition. Minister for Education, Ruairi Quinn TD was on hand to present the winning pupils with their awards and commended the Newspapers in Education (NiE) programme.

This is the second year that NNI has run the Press Pass initiative, this year with the support of the Irish League of Credit Unions and their affiliated credit unions. In autumn 2013, 300 registered schools received 16 national newspapers and their local newspapers over a two-week period. In addition, each student registered with NNI Press Pass received a specially created guidebook, which aimed to encourage students to improve their literacy skills, analyse newspaper content and create their own content. The entire programme was provided completely free of charge to schools and students.

Schools then entered the best journalistic work produced by their students into a national journalism competition.

Presenting the NNI Press Pass Awards, Minister Quinn said: “Press Pass is a highly commendable initiative from NNI. It not only helps students to improve their literacy skills, taking part in the programme also encourages the development of analytical skills and social awareness. I’d like to congratulate each of today’s winners on the original journalism that they have produced. In addition, I’d like to recognise the initiative and hard work that NNI has brought to deliver Press Pass to schools throughout Ireland”.

Schools throughout Ireland completed the NNI Press Pass programme. Each school was encouraged to enter the best journalistic work produced by their students into a national competition. Today’s awards ceremony recognised the best of those entries, under five categories, plus an overall winner, whose work was judged to be outstanding.

The other category winners were:

Reading Newspapers is an educational experience

Speaking at today’s event, NNI Chairman Matt Dempsey said that Press Pass allows students to take advantage of the many educational resources that newspapers have to offer.

“All NNI’s member publishers firmly believe in the efficacy of Press Pass. That belief is based on research from around the globe that finds, consistently, that newspapers play a vital role in the development of writing, reading and critical thinking skills.

“NNI Press Pass was developed in line with the Government’s stated aims on literacy. Through Press Pass students become familiar with a variety of language types that they will encounter during the Leaving Certificate programme. They learn to analyse content and to produce their own journalism. Furthermore, they are asked to think and form opinions about important social issues,” said Dempsey

The guest speaker at the awards was film producer and educator, David Puttnam. Puttnam highlighted the requirement for a free and functional press in any democracy and hailed the contribution of newspapers to society.

Over the past two years. 31,500 students have taken part in NNI Press Pass and schools have submitted over 1,700 entries into the national journalism competition.

Since last year, registration to the programme has grown from an initial 255 schools to include over 300 schools and 18,000 Transition Year students in 2013. This expansion is testament to the popularity of the programme and the utility of the materials provided by NNI to schools.

The programme has received widespread praise since it launched, with the Department of Education giving its full support to NNI Press Pass since the outset.

This year’s NNI Press Pass Awards was kindly supported by the Irish League of Credit Unions and their affiliated credit unions.

“We are always delighted to find a partner who is as passionate about educating young people as we are and the Credit Union, in getting behind Press Pass, has demonstrated its commitment to the literacy and general education of the nation’s young people,” said Dempsey.

Speaking at the event, Martin Sisk from the Irish League of Credit Unions said:
“We are delighted to work with the National Newspapers of Ireland on this extremely worthwhile initiative. Credit unions are deeply involved in local communities across the length and breadth of Ireland and have always worked to support young people wherever possible. We became involved in ‘Press Pass’ because it’s an initiative that encourages young people to analyse, write and photograph life around them as they see it, while at the same time teaching important literacy and media literacy skills.’